Lag B’Omer will begin at sundown on May 22. Outside of Israel, Lag B’Omer may not be a well-known Jewish holiday. Some may know that there’s a bonfire involved, but what exactly are we celebrating?

From the last day of Passover until the first night of Shavuot, we count 49 days. This daily ritual of counting is called “Counting the Omer”. This is a time of semi-mourning, and observant Jews refrain from celebrations, like weddings, or from cutting their hair and listening to music.

The Talmud explains that we mourn the death of thousands of Rabbi Akiva’s pupils during the Omer period, however, on the 33rd day of the Omer, the plague ceased. 33 is the numeric equivalent to the letters “lamed” and “gimmel” which form the acronym “lag”.

But why the bonfire? It is told that Rabbi Shimon was Rabbi Akiva’s star pupil, and his teachings are compiled in the Book of Zohar. Zohar means “glow”, and a bonfire symbolizes Rabbi Shimon’s contributions to affirming that the Torah will be forever.

There are many wonderful ways to celebrate Lag B’Omer including, dancing and singing around a bonfire, playing with bows and arrows, planting trees in Israel, as well as, getting a haircut or getting married! It is a joyous day, and usually celebrated with community. 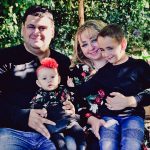 May 2019 Family of the MonthEngaging, Sprout