Not Just Any Playdate: Making Space to Build Bridges

On Sunday, January 27, a group of 11 toddlers and pre-schoolers gathered with their grown-ups for storytime and yoga in a synagogue classroom. But this wasn’t just any playdate. It was a “friends of all faiths” gathering co-sponsored by Sprout, PJ Library, Congregation B’nai Shalom, and the Interfaith Council of Contra Costa. 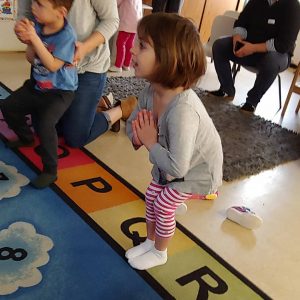 The playdate was organized by Brianna Shahvar, a mother of a one-year-old and three-year-old living in Pleasant Hill. She worked closely with staff at B’nai Shalom to make this vision a reality, along with the support of Liora Brosbe, Federation’s Family Engagement Officer. “B’nai Shalom was very easy to work with. They were eager to do it. Connie, their yoga teacher, even volunteered her time for the event.” said Brianna.

So how did this playdate come about?

Brianna explained, “A couple of years ago my older son went to Ganeinu at Temple Isaiah, a Friday play group. At that time, there was a mosque that was attacked and some of the parents were talking about what we should be doing in this climate that we’re living in to make sure that our kids are part of a community of people who work against this hatred. That’s where they idea for the interfaith playdate originally came from. We didn’t do it at the time, and

I always felt bad about that.

“After the Pittsburgh shooting, I went to the memorial service at Congregation B’nai Shalom and almost everyone who spoke talked about the fact that it’s really easy to be scared right now. But, the way to work against this kind of hate is to build connections.

“When I looked around that service, there was no one my age there. At my stage of life, as a mother of young kids, it’s so hard to get anywhere on a Tuesday night. So, I thought this playdate is something that we could do to build those connections and contribute something.” 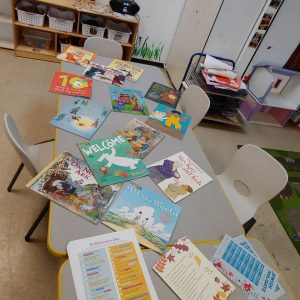 The kids loved mooing and meowing during their cat/cow poses and perusing PJ Library books. Brianna’s also thrilled that this playdate is spurring copycats. Brianna’s sister in Maryland shared the idea with a PJ Library staffer there, and now they’re planning one in their community.

Plans are in the works for a repeat event. “I definitely would love to do it again if I could get a church to partner with us or another group that would bring in diverse people. I think that would be really great.”

Are you interested in helping Brianna make more “friends of all faiths” playdates a reality? Email Liora Brosbe, our Family Engagement Officer, to tell us how you want to get involved. 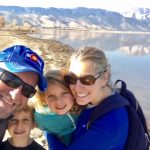 February 2019 Family of the MonthEngaging, Sprout 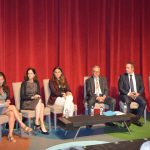