Facing Unexpected Trauma: One Family’s Journey to Recovery from Harvey

The home Judi and Roger shared with their four sons in Houston had never been flooded before—neither had their street—and they were unprepared for just how quickly the effects of Hurricane Harvey would devastate their homes and lives. Before they even had a chance to pack a change of clothes, the family found themselves huddled on a bed, watching in disbelief as the water rushed in around them. Two of the couple’s four sons were with their grandparents that night, but the rest of the family found themselves surrounded by water and unsure of what was next or how to get to safety.

It was too late to get to the roof of their one-story house, so when their neighbors offered them a room on their second floor, Roger put his 7-year-old son on his shoulders and they all waded outside through waist-deep water.

“We were on our neighbor’s second floor for three days,” Judi recounted. All four of them, along with two dogs, using a child’s bedroom as a shelter, with their hosts in the room next door and a foot of water on the first floor. Rather than attempt evacuation, they decided it would be safer and more comfortable to stay put.

Out on the street, the water current was so strong that Judi could barely get to her house to try to salvage a few things. When she finally managed to get inside, she grabbed her laptop and a few other items. But virtually everything the family owned was destroyed.

The Jewish Federation and the Jewish community came through with the help they needed. Meals arrived, and volunteers showed up to help them sort through their belongings. The Evelyn Rubenstein Jewish Community Center of Houston (ERJCC) handed out supplies and Target gift cards. Federation provided emergency money to get them through the weekend, no questions asked. Volunteers from Federation’s Young Leadership department came to help them pack up. “When everyone else had left, they stayed and continued to help us. Even when I said no, other people need help more, they still sent help. They knew I needed it.”

But for Judi and her family, the most valuable service the Jewish community provided was trauma counseling.

“Jewish Family Service set up shop at the ERJCC, and provided someone who was there to listen when I really needed it. I could break down because they were there to help.” A therapist herself, Judi has been moved by the support offered to her family. “It’s not easy for me to ask for help — I’m used to giving it. It’s been a humbling experience,” she said.

“We’re so fortunate to have this community. The Houston Jewish community will survive this and come back stronger.”

The past few weeks have wreaked devastation and catastrophic damage, and caused trauma from Houston to Florida, Puerto Rico to St. Thomas. But hurricane season is far from over. Please continue to help those impacted by these disasters. Donate here today. 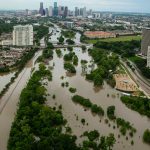