Word of the day: Shpazam

How to use it: This word was invented my our Israeli tour guide Elinoy. It should be used anytime you don’t know how to say a word in English or Hebrew, or just as much as possible.

Example: Everyone go shpazam and meet back here in an hour.

Food of the day: Za’atar

Za’atar is a Mediterranean spice mixture that tastes good on bread, salads, meat, and pretty much everything. Its components include za’atar leaves, ground sumac, sesame seeds, salt, and a spoonful of olive oil. We had the opportunity to make our own za’atar during a visit to a non-profit called Sindyanna of Galilee. The organization creates economic opportunities for Arab women and sells delicious olive oil.

Photo of the day:

Some of the group posing on a statue at the Israel Museum in Jerusalem. The statue spells out the Hebrew word for love, “ahava.” At the museum, we saw a large model of Old Jerusalem and the Dead Sea Scrolls, which are ancient manuscripts that were found in a cave in the first century B.C. Amazingly, they’re still legible, though the group of Israelis who recently joined our group could not understand the ancient Hebrew. How many things have you seen that are over 2000 years old?

Sarah Plovnick is a participant on the East Bay Community’s Birthright Israel trip. She is sharing photos of what she’s experiencing, Hebrew words she’s learning, and glimpses of what life is like on a Birthright bus for ten days. Yalla! 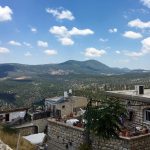 Tzfat is YofiIsrael and Overseas 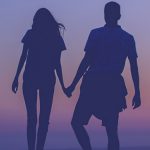