Jeff Kasowitz, co-founder of the Jewish Studio Project and recipient of the 2015 Fromer Award, has just released his first studio album, Arba’im Shanah (40 Years). The album, begun on his 40th birthday two years ago, explores and reinterprets traditional Jewish texts through melody and arrangement. In 2015, Kasowitz won the Fromer Award, which is awarded every two years to projects in Jewish arts, scholarship, or education. The Fromer Jewish Education Incentive Scholarship Fund is an endowment fund of The Jewish Community Foundation. It was established in 1985 in honor of Seymour Fromer, a pioneer in East Bay Jewish communal life.

Each track on the album has its own feel and features different musicians, instruments, and influences. The eclectic album has a wide range of sounds and styles — everything from folk to reggae to bluegrass — arising from a collaborative process of engaging Jewish texts. All in all, it’s quintessentially Jewish, with a modern twist. Kasowitz views this music as midrash, a new spin on ancient teachings. He feels that such creative expression is much needed today. “Each one of us is creative, even if we think we aren’t. When we tap into our creative capacity, we can add beauty to the world and create new possibilities.” For Arba’im Shanah, Kasowitz worked with texts that have special meaning, provide comfort, or have been troubling to him. “When we add our voices and expressions to our tradition, it becomes more alive and vibrant.”

Kasowitz spoke of how the Fromer Award funding helped support the album. “The Fromer Award gave me the opportunity to go bigger and be bolder with this project — to be more expansive in terms of instrumentation and arrangement,” he told us.

“I think my favorite part of this process was that it brought together a group of individuals across differences — religious, political, stylistic — and melded creative and spiritual influences to create something truly unique and uplifting.”

The album is dedicated to Kasowitz’s first son, Remy. As a stay-at-home dad for the first months of Remy’s life, Kasowitz spent countless hours “noodling” on his guitar soothing and entertaining. These sessions led to the first few melodies for the album.

Arba’im Shanah is available for download here. All proceeds go toward supporting the Jewish Studio Project’s work to activate creativity, promote positive social change, and inspire a Judaism that is hope-filled and vibrant. 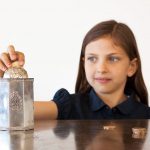